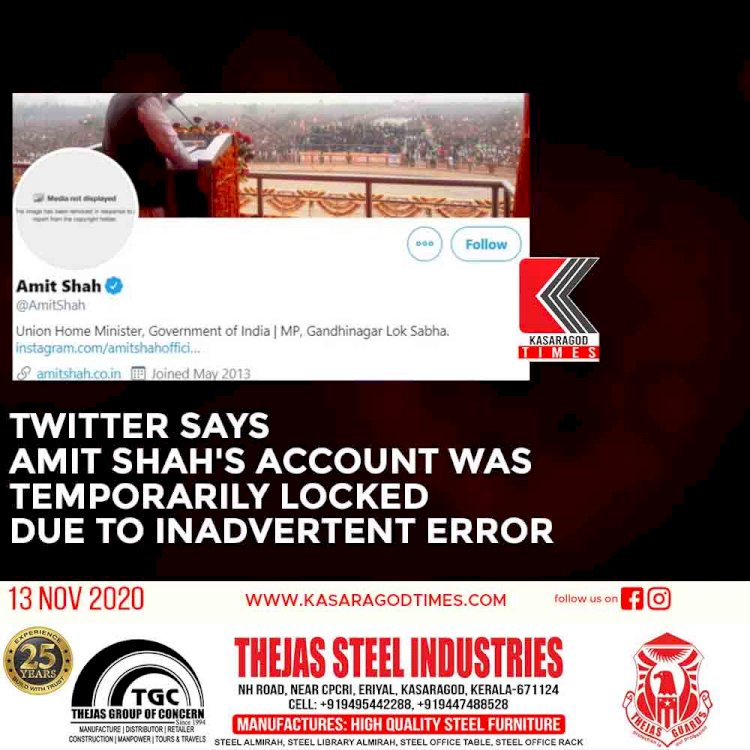 NEW DELHI(www.kasaragodtimes.com 13.11.2020): Twitter on Friday said Union Home Minister Amit Shah's account was temporarily locked due to an "inadvertent error" and the decision was reversed immediately.

Shah's Twitter display picture was on Thursday removed by Twitter in response to a "report from the copyright holder".

Clicking on Shah's picture showed a blank page with the message "Media not displayed. This image has been removed in response to a report from the copyright holder".

"Due to an inadvertent error, we temporarily locked this account under our global copyright policies. This decision was reversed immediately and the account is fully functional," the Twitter spokesperson said.

Shah has 23.6 million followers on the microblogging platform.

The development comes at a time when the government has issued a notice to Twitter for showing Leh as part of Jammu and Kashmir instead of the Union Territory of Ladakh.

According to IT ministry sources, Twitter has been directed to explain within five working days why legal action should not be initiated against the platform and its representatives for disrespecting the territorial integrity of India by showing an incorrect map.

Covid 19- Majority of the people who died in August had...