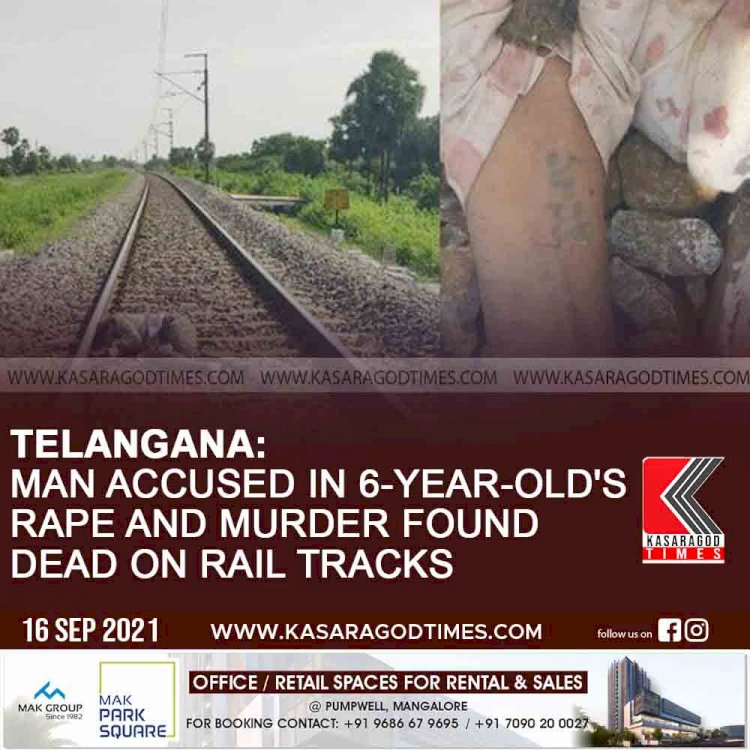 The Telangana Police on Thursday confirmed that a man, who was accused of rape and murder of a six-year-old girl in Hyderabad, was found dead on railway tracks. Sharing the update from his official Twitter handle, the director-general of police (DGP) of Telangana said that the accused of the 'child sexual molestation and murder at Singareni Colony' was found dead on the railway tracks in the limits of the Ghanpur police station in the state's Janagaon district. The individual was recognised after verifying the identification marks on his body, the police official said.

'Attention Please: The accused of 'Child Sexual Molestation and murder @ Singareni Colony', found dead on the railway track, in the limits of Ghanpur Police Station," the DGP tweeted out on Thursday. 'Declared after the verification of identification marks on the deceased body.'

P Raju, the accused in the rape and murder case, was said to be absconding till as late as Wednesday night. According to a senior police official from Janagaon, a few locals discovered a body on the railway tracks in Station Ghanpur at around 9:45am on Thursday, following which the police were alerted. After the officials arrived at the spot, they identified the body with head injuries as the accused in the Hyderabad rape and murder case. The police suspect that the 30-year old P Raju, the accused, must have committed suicide by jumping before a running train, as per an official.

Notably, the development comes a day after reports quoted Telangana labour and employment minister Malla Reddy as saying the accused in the rape and murder case will be 'nabbed' and 'killed in an encounter'.

The six-year-old girl was found murdered at her neighbour's house in Saidabad last Friday; the incident triggered massive protests by local residents, who suspected that the minor was sexually assaulted before she was murdered. The girl had gone missing on September 9, following which her kin lodged a police complaint. The body, with several injury marks, was discovered a day later; and the police later confirmed after a post-mortem that the girl was raped.

In kasargod on Saturday 96 people were cured of the disease...

Kasargod coronavirus confirmed by 6 others