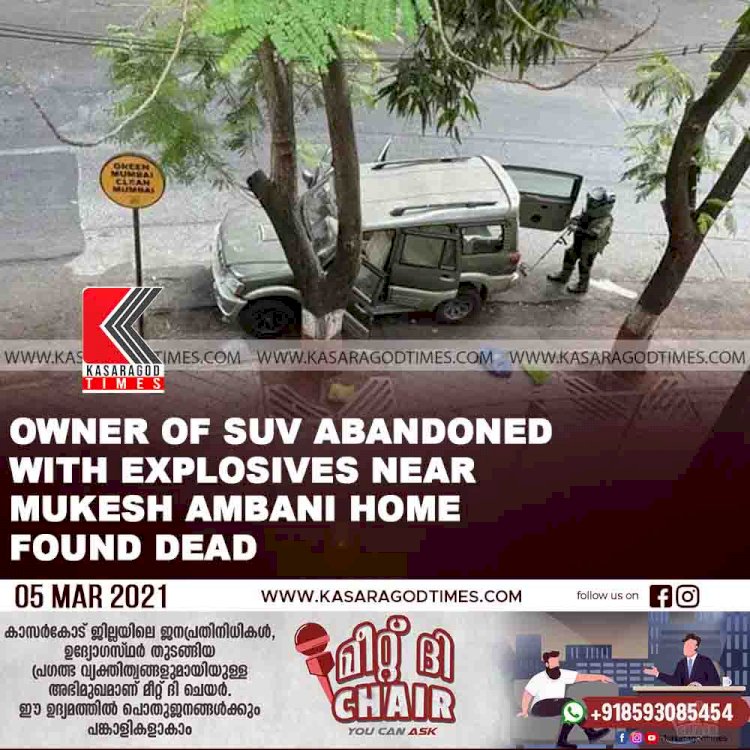 Mumbai(www.kasaragodtimes.com 05.03.2021): In a major twist in the mystery of an explosives-filled car found near industrialist Mukesh Ambani's Mumbai home, the owner of the Scorpio SUV has been found dead.

The man's body was found today from a creek near Mumbai, according to the Thane police, quoted by news agency ANI. A case of accidental death has been filed.

Twenty gelatin sticks -- material used in explosives -- were found in the black SUV by the bomb disposal squad last Thursday. The car was abandoned around 1.4 km from Antilia, Mukesh Ambani's 27-storey home in south Mumbai.

A day after its discovery, the police learnt that the SUV was stolen and tracked down its owner, who lived in Vikhroli, another part of the city.

The car had some number plates and a handwritten letter addressed to the Reliance chairman and Nita Ambani inside, the city's police said. A Mumbai police spokesperson said the number plate of the SUV matched that of a vehicle on Mukesh Ambani's security detail.

A man in a mask and a hoodie was seen in security footage parking the car, but he was not identified.

Committed to engaging with India to make vaccine available...

In kasargod on Thursday 91 people were cured of the disease

Public transportation will be allowed in the district;...