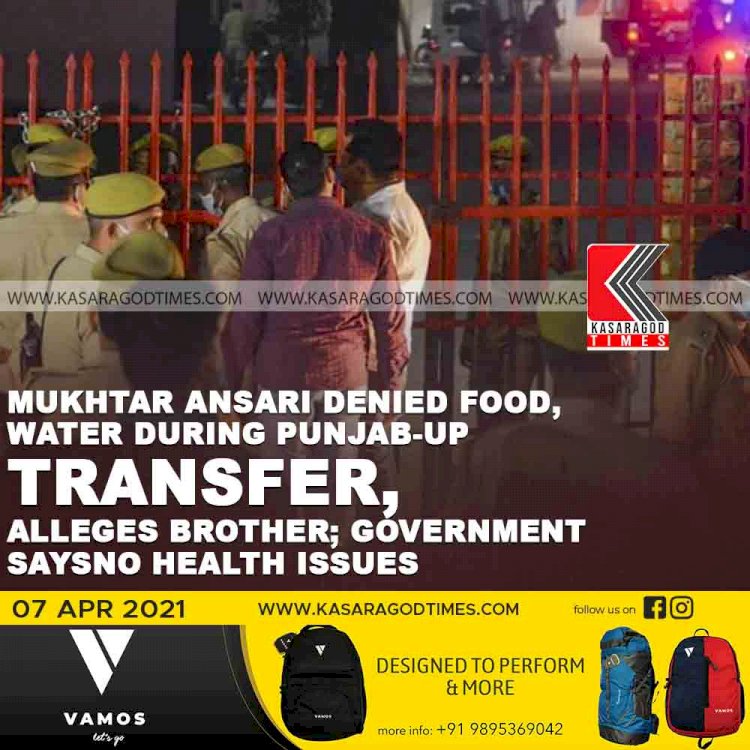 BALLIA(www.kasaragodtimes.com 07.04.2021): Gangster-turned-politician Mukhtar Ansari's brother alleged on Wednesday that inhuman treatment was given to him while being transferred to Banda jail from Punjab, saying it could have been better had he been shot dead at a road crossing.

The Uttar Pradesh government, however, said a team of doctors of the Banda Medical College examined Mukhtar Ansari at the jail and no "immediate" health issues were found by it.

"Inhuman treatment was meted to Mukhtar while being shifted from Punjab to Banda jail. In over 15 hours journey, he was not given water and food on the way and was also denied medical aid. Due to this, he became unwell and reached Banda jail in a semi-unconscious state," Afzal Ansari, the BSP MP from Ghazipur, told PTI.

Afzal Ansari, however, did not elaborate on how did he get to know about the treatment meted out to his brother during his transfer to the Banda jail.

"The Yogi Adityanath government has left behind Britishers by such acts. Contrary to the jail manual, Mukhtar has been kept in isolation barrack. Those who have to protect laws are creating terror. It would have be better that he (Mukhtar) was made to stand at some road crossing and shot dead," he said.

The Uttar Pradesh government in an statement issued here said, "Undertrial Ansari was brought from Punjab's Ropar jail at about 4.50 am to Banda prison gate by a special team and he finally got entry at 5 am. All his belongings were checked and no objectionable items were found. A team of Banda Medical college doctors did his check-up and found no immediate health issues."

"Mukhtar Ansari would be tested for COVID-19 later in the day inside the jail. According to the Supreme Court orders, with the help of district administration and Chief Medical officer, Banda, his health arrangements are being ensured," the statement said.

Elaborate arrangements have been made inside the prison, where he will be kept in barrack number 16, which will be under 24-hour camera surveillance, the statement said, adding the entire Banda jail is covered with CCTV cameras and is being monitored by senior officers from jail headquarter command centre in Lucknow.

For outer security of the jail, additional force of PAC has been deployed and Banda city magistrate has been made incharge jail superintendent for administrative and security arrangements, it said.

Two new deputy jailors have been deputed and additional head jail warder and jail warder have been made available to the prison, the government statement said.

Afzal Ansari also claimed that the blood-sugar level and blood pressure of Mukhtar Ansari, who has diabetes, have increased and alleged that the jail administration is not accepting the request to provide him a doctor.

"Instead of treating him, he was being administered injection to put him to sleep," Afzal Ansari alleged.

He further claimed that his brother was kept in the ambulance for over one-and-half-hours even after reaching the Banda jail.

"At around 9 am, some persons known to Mukhtar reached the jail to meet him but were returned from the prison premises. Mukhtar is an undertrial and despite this he is getting treatment like a convict," he said, adding "such a treatment was never given to any undertrial in the history of the country".

After spending over two years in a Punjab prison, Mukhtar Ansari was brought back to Banda jail in the early hours of Wednesday.

He was ferried in an ambulance guarded by a strong posse of gun-toting security personnel throughout his 900-km journey from Rupnagar to the Uttar Pradesh town in the Bundelkhand region.

Mukhtar Ansari was lodged in Rupnagar jail in January 2019 in connection with an extortion case.

He is facing 52 cases in Uttar Pradesh and elsewhere, and 15 of them are in the trial stage.

In Kasargod on saturday, 96 people were infected through...