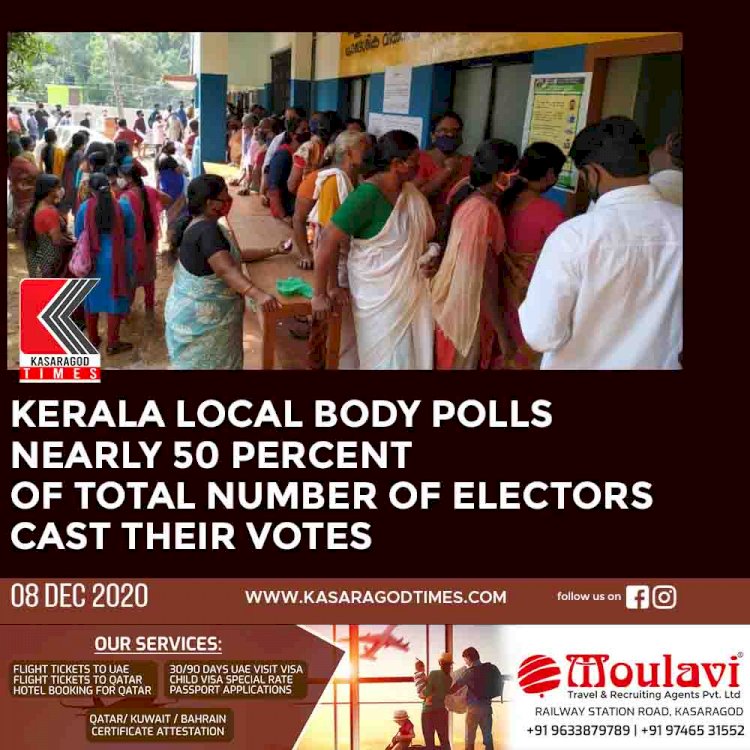 THIRUVANANTHAPURAM(www.kasaragodtimes.com 08.12.2020): Nearly half of the total number of electors have cast their votes in the first phase of the local body elections in the state on Tuesday, as less than five hours remained for polling to end.

Five districts -- Thiruvananthapuram, Kollam, Pathanamthitta, Alappuzha and Idukki -- are voting in the first phase on Tuesday. This is the first election to be held in the state amid the COVID-19 pandemic.

A technical snag was reported in EVMs in five booths in Alappuzha, two booths in Thiruvananthapuram and one in Kollam. This led to polling being suspended for a brief period in the initial hours of polling. There were complaints of voters violating COVID protocols by not maintaining enough social distancing while standing in the queue in some polling stations.CPM workers allegedly manhandled a Congress booth agent at Kattakkada in Thiruvananthapuram. Sharmad Lal was reportedly attacked near Kattakkada Christian College. Following the incident, workers of both parties assembled outside the polling booth and raised provocative slogans. Kattakkada police intervened and drove the crowd away.

Mathai, 88, a voter in Vechochichira panchayat in Pathanamthitta died at the polling booth at Ranni Idamuriyil Government  Higher Secondary School. He was a voter in the first ward of Vechoochira panchayat. Mathai was the uncle of the UDF candidate in the ward Samji Idamuriyil. Another voter, Balan, aged 60, collapsed and died at the Mahadevikad  SNDP High School polling booth at Karthikapally in Alappuzha district.

No other untoward incidents were reported from across the five districts as voting progressed at a brisk pace.

Minister J Mercykutty Amma, who cast her vote in Kollam, flayed the BJP for its alleged involvement in the killing of a CPM worker in the district. She accused the saffron party of posing a threat to peaceful life.

The Congress in Kollam filed a complaint against a presiding officer, who was on election duty at the Jones Cashew Company polling booth 1 in Kottamkara grama panchayat, as she was wearing a mask with the LDF election symbol.

Kollam District Collector B Abdul Nassar issued orders to replace the officer from polling duty for violating rules. He reiterated that no one should display party symbols in any manner inside the polling station.

Chief Electoral Officer Teeka Ram Meena lodged a complaint with the Thiruvananthapuram District Collector after his name was found to be removed from the electoral roll in Poojappura ward in Thiruvananthapuram Corporation. Meena had voted in last year's Lok Sabha election.

Even as high profile voters made a beeline to the polling booths, two political stalwarts and former Chief Ministers - VS Achuthanandan and AK Antony - will not be voting this time due to ill-health.

Achuthanandan had applied for postal ballot but election officials turned down his request as rules do not allow for postal ballot on account of ill-health. AK Antony, who recovered from COVID-19 a few days ago in New Delhi, has been advised rest and will not be voting this time.

29 new COVID-19 cases in Kerala on Monday; 2 in Kasaragod