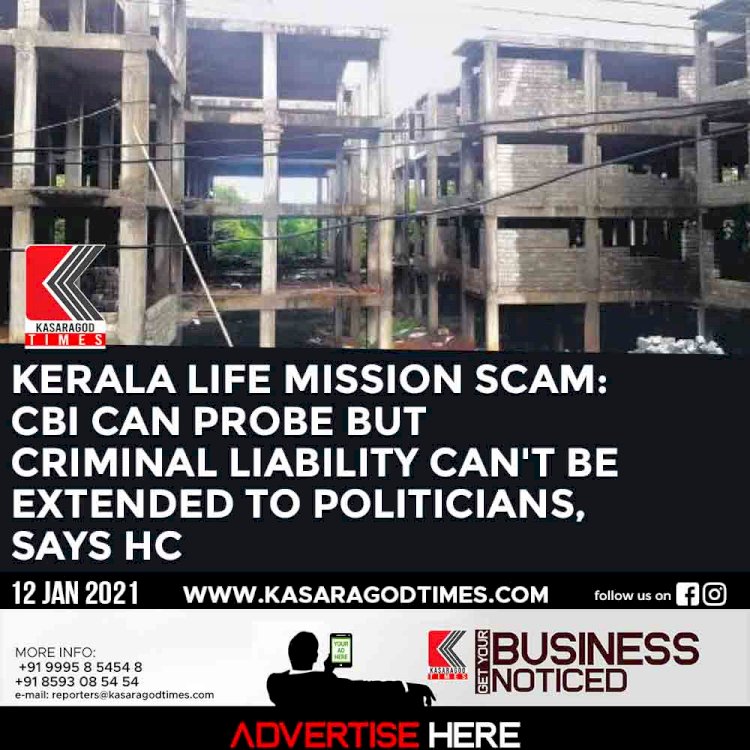 KOCHI(www.kasaragodtimes.com 12.01.2021 Tuesday): The Kerala High Court on Tuesday granted permission to the CBI to continue the investigation in the alleged Foreign Contribution (Regulation) Act (FCRA) violations over funds received from a foreign sponsor for implementation of the Life Mission housing project at Wadakkancherry in Thrissur district.

The case relating to the Life Mission, the Kerala government's flagship housing project for the homeless, involves a corruption allegation into the award of the contract to construct 144 apartments in Thrissur district's Wadakkancherry to Unitac, a construction company, at the behest of M Sivasankar, the then principal secretary of the chief minister in 2019. For this purpose, Dubai-based Red Crescent signed an MoU with the Life Mission to provide financial aid (AED 10 million or Rs 20 crore) to build the dwellings, the contract for which was given to Unitac.

Justice P Somarajan in his order also indicated the role of senior government officials in the alleged corruption in the housing project saying the "very nature of the mischief done in furtherance of MoU would suggest the involvement of highly educated professionals - a mastermind behind it".

The court, however, made it clear that criminal liability cannot be extended to political executives including the chief minister, ministers, and legislatures merely on the ground that they have taken a policy decision to implement the project.

The court also vacated the stay for the probe while dismissing the petition filed by the CEO of LIFE Mission and Santhosh Eappen, MD of Unitac seeking to quash the FIR against them.

The court pointed out that it was a known fact that the LIFE Mission is a project formulated and launched by the state government based on a policy decision. "Then it is up to the civil servants, the non-political executive (permanent executive) to implement it by due process of law. The typical nature of the facts involved in the case would reveal a high profile intellectual fraud played in furtherance of MoU to avoid an audit by CAG and to get kickbacks and gratifications," the court noted.

The officials' failure to address the issue or mischief, if any, in the matter of its implementation of the housing project, cannot, by itself, be a ground to extend any criminal liability against the political executive, unless the same was brought to their notice with its legal consequences in writing or by that means they have obtained a personal benefit with knowledge of the breach or mischief done.

"Even proactive steps taken by the political executive in the implementation of the project/policy decisions may not, by itself, make them responsible for any criminal liability, especially in a case of this nature, wherein a well designed and intelligently hidden agenda was scrupulously employed by the civil servants in connivance with the middleman, the Consulate General of UAE, Trivandrum, unless it was known or made known to them with its legal consequences specified in writing by the civil servants, who are bound to do it by exercising a healthy confrontation," observed the court.

In this case, it appears that the alleged violations were at the time of implementation of part of the LIFE Mission project by the permanent members attached to it – the IAS officers with Swapna Suresh, Sandeep Nair, Sarith, Santhosh Eappen and their allies. "The mere fact that a policy decision was taken by the chief minister, the ministers or the legislature, may not by itself be sufficient to extend criminal liability against them for the wrong done by the non-political executive attached with the project and their allies," it said.

Plus two student found dead at isolated spot near her home...

Parvathy resigns from AMMA: Abandoned all hope that anything...