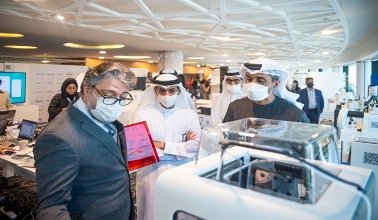 In the presence of high-level dignitaries and guests from Shenzhen, China and Dubai, UAE, the Shenzhen Products Show was successfully inaugurated yesterday in Dubai to a large audience of enthusiastic buyers across the UAE.

The Hybrid event which is being held at Dubai Chambers headquarters in Dubai was attended by government officials and entrepreneurs from Dubai and Shenzhen, China.  Over 300 public and private sector stakeholders witnessed the launching ceremony which was streamed live in both countries.

Co-organized by Dubai Chamber of Commerce and the China Council for the Promotion of International Trade (CCPIT) the show aimed to build new bridges between public and private sector stakeholders between the two nations. Over 60 Shenzhen-based companies specialising in life and health, consumer electronics and intelligent security are showcasing more than 350 high-tech products and technologies.

Addressing the participants in a special video message, H.E. Ali Obaid Al Dhaheri, Ambassador of UAE to China, Embassy of UAE in Beijing, spoke about the close business and cultural ties shared by the UAE and China and highlighted the significance of Expo 2020 Dubai and Shenzhen Products Show as a key factor and catalyst that will further strengthen the countries’ comprehensive strategic partnership.

H.E. Abdulla Al Basti, Secretary General of the Executive Council, also elaborated on UAE-China economic ties and noted that trade between the two countries reached $49 billion in 2020, while the value of Dubai-Shenzhen trade reached over $1 billion, adding that he expects bilateral trade to grow in the coming years following announcements by Shenzhen companies last year to establish operations in the Dubai market.

H.E. Shen Feng Zhang, Chief Representative of Chinese Government to EXPO 2020, and Vice Chairman of China Council for the Promotion of International Trade, described Shenzhen and Dubai as “friendship cities” and noted that the Chinese city was leveraging Shenzhen Day as a platform to hold a series of economic, trade and cultural exchange activities.