Covid-19: People from Italy, UK and other European countries should stay in the room quarantine: District Collector 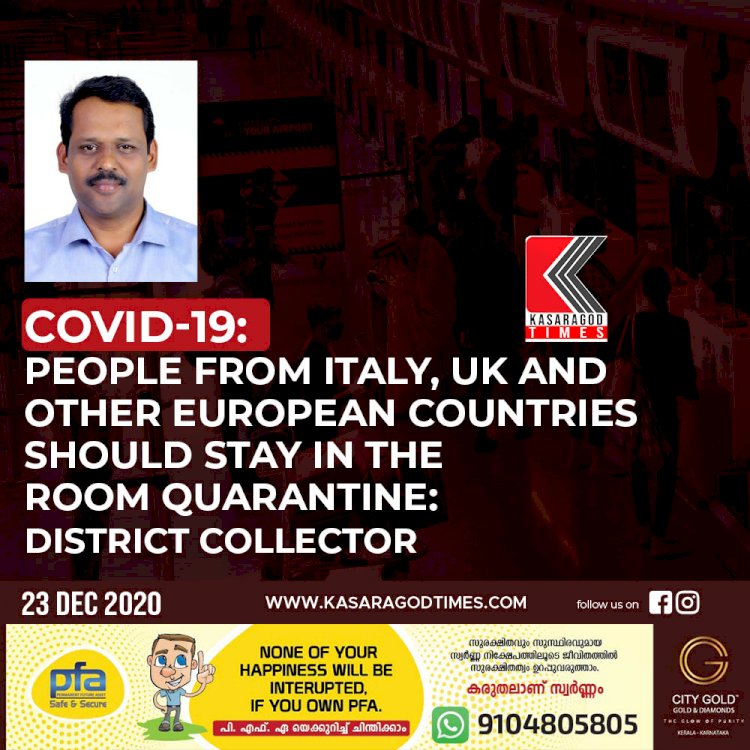 Kasargod (www.kasaragodtimes.com 23.12.2020): In order to prevent the spread of the new variant of the Covid-19 virus, the District Collector Dr. S.S. D. Sajith Babu informed that those with symptoms should contact the doctors of the nearest primary health center.The ward head called the public awareness committees immediately and directed them to intensify the work. Marriages and celebrations must be registered with the local authority. Christmas and New Year celebrations should be under Kovid control. Only a maximum of 100 people will be allowed. Whenever possible you should have all four of these components in place for launch to maximize profits. Sports tournaments are not allowed.The Collector said that the Mash project, which played a key role in the district's consistent performance in reducing the number of Kovid cases, has not stopped. Those interested in those who have been on duty so far can continue. New ones will be hired instead. The old group cannot be completely changed. Crowds will not be allowed in tourist spots, including beaches in the district.District Collector Dr. D. Sajith Babu presided over the function. District Information Officer M Madhusoodanan, Deputy Director of Education KV Pushpa, Mass Media Officer Abdul Latif Mathil, Public Education Protection Yajna District Coordinator Dileep Kumar, MAS Project Coordinator Vidya PC and KSSM District Coordinator Jisho James were present.

covid for 64 people in kasaragod on monday;109 people got...