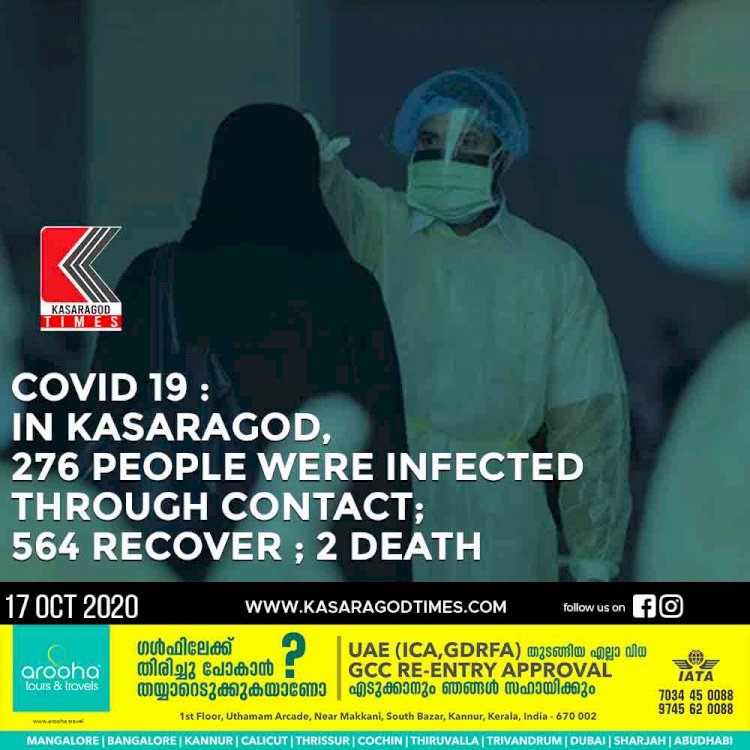 Kasargod (www.kasaragodtimes.com 17.10.2020): CoVid 19 has been confirmed for 280 more people in Kasargod district. The disease affected 276 people, including six health workers. There are 4834 people under surveillance in the district
The total number under surveillance in the district is 4834 including 3807 in households and 1027 in institutions. Another 179 people were newly monitored. A further 1491 samples were sent for testing, including the Sentinel Survey. The test results of 365 people are yet to be received. 299 completed the observation period. 234 people were admitted to hospitals and Kovid care centers.

328 people were discharged from hospitals and Kovid care centers.
Kovid was negative for 564 people
DMO Dr AV Ramdas said today (October 17) that Kovid was negative for 564 people who were undergoing Kovid treatment.The health ministry confirmed that Kovid had died of two other deaths. This brings the death toll in the district to 152. Kovid confirmed the deaths of Kamalaksha (4) of Kanhangad municipality and Kunjambu Nair (74) of Kallar panchayath.

Covid 19 confirmed 10 more in the state; Relief for Kasargod...

Kasaragod resident who died on Tuesday had COVID, Kerala...