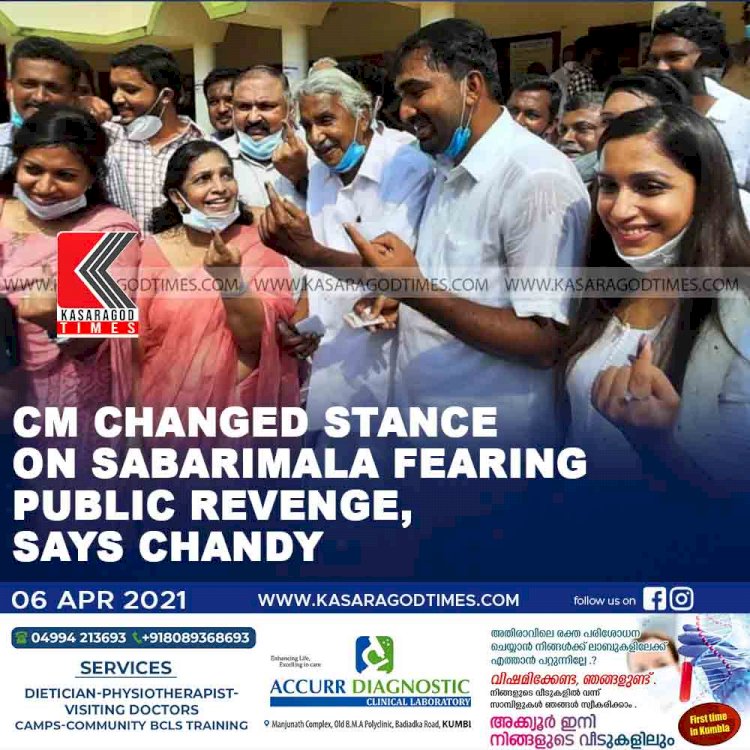 Puthupally: Former chief minister and senior Congress leader Oommen Chandy on Tuesday said that Pinarayi Vijayan surprised him by changing his stance over Sabarimala women entry issue on the day of election.

Speaking to reporters after casting vote, Chandy alleged that Vijayan had filed a counter affidavit against the affidavit filed by UDF to uphold the traditions and faith in Sabarimala temple. The affidavit is still in the Supreme Court. They are not willing to withdraw it. However, today he took a U-turn fearing the public. No devotee in Kerala will trust him, Chandy said.

They supported women entry in the court. They welcomed the SC verdict and told everyone that the government had the liability to implement the verdict. They facilitated women entry and conducted women's wall in the name of renaissance. Such a person shocked me by changing the stance on the day of election, he added.

NSS has always been consistent on their stance over Sabarimala women entry. They have always stood by faith and traditions. The CM had then criticized NSS. The same CM changed stance today fearing the public may take revenge on him at the polling booths, Chandy added.

He also added that the Assembly election in Kerala has added vigour to the Congress at the national level.

Heavy security in Kasargod; Police block the vehicles in...

COVID-19: Arrivals from 10 countries to be denied entry...

50 detained in Delhi for staging protest in support of...

covid confirmed for 21 people in the Nileshwaram municipality...