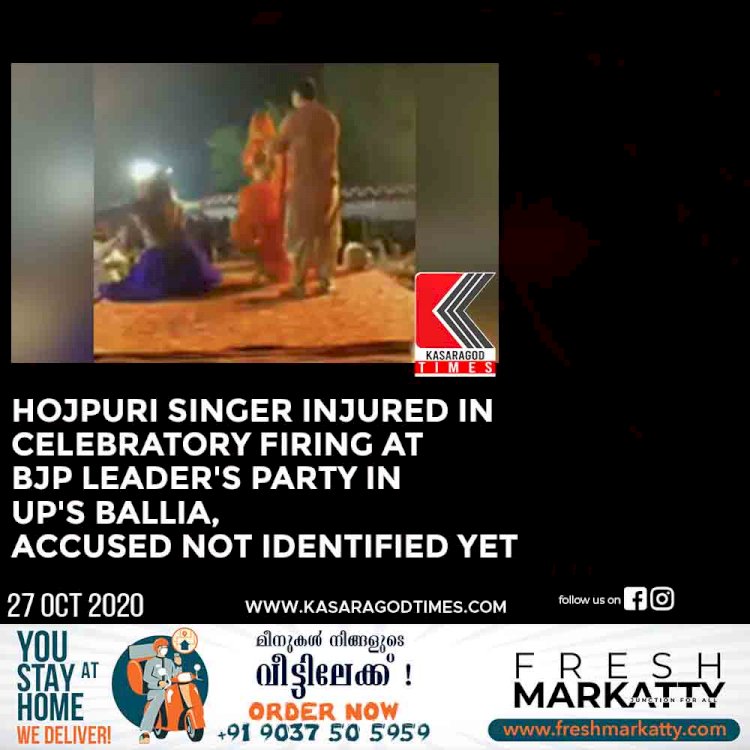 Ballia(www.kasaragodtimes.com 27.10.2020): One person was injured in celebratory firing during a birthday party at a BJP leader's residence in Uttar Pradesh's Ballia district. The man, a stage singer, was hit twice but is out of danger, the police said.

The incident took place on Monday in Mahakalpur village of Ballia at the residence of Bhanu Dubey, vice-president of the district Bharatiya Janata Yuva Morcha, the BJP's youth wing.

The event, marking the birthday of Bhanu Dubey's son, involved music and dance during which Bhojpuri singer Golu Raja was performing on stage along with others. Reports say that during the function around 7-8 people began firing their guns.

A video clip of the incident has been doing the rounds on social media since last night. It shows a shaken Mr Raja running off the stage after being hit twice while singing.  The police soon arrived at the venue to probe the incident, although it is yet to name the person who shot Mr Raja. Ballia Superintendent of Police (SP), Devendra Nath, has said that one bullet hit Mr Raja's stomach and the other his hand, fracturing the bone.

The Bhojpuri singer has been moved to Varanasi to surgically remove the bullets. SP Nath said Mr Raja is out of danger. He also said that the shots were fired from a licensed revolver.

Earlier, on October 5, a 55-year-old woman was killed and a minor girl injured in such celebratory firing in Bansakha village in UP's Banda district.

Covid to 14 others in state; One more person was diagnosed...

The cat and cockroach in the isolation ward; Kasargod Government...

The count goes on,with Biden on the cusp of presidency