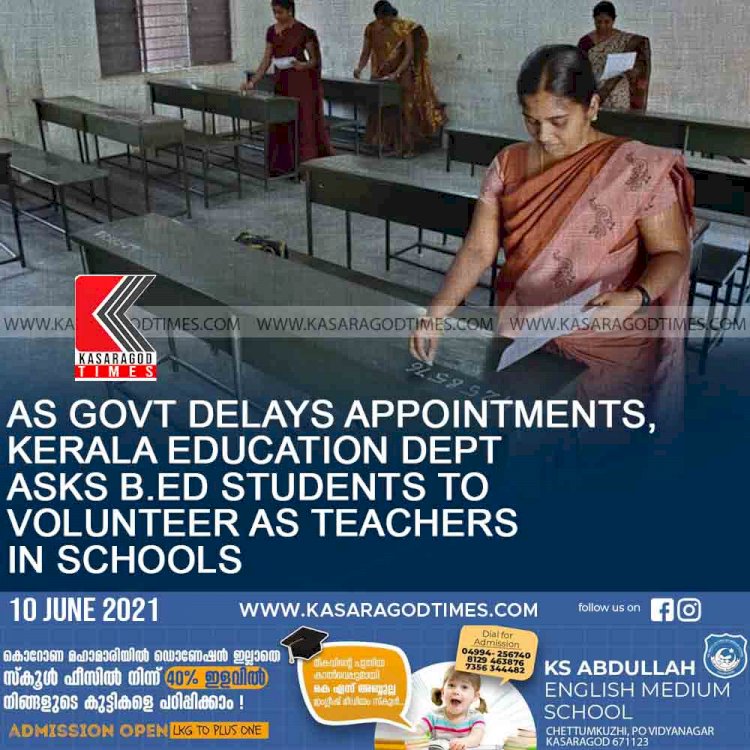 KASARGOD: The Department of Education is planning to recruit 'trainee teachers' who got the Bachelor of Education (BEd) or the Diploma of Education (DEd) last year or are now in the final year of the courses to conduct online classes for school students.

However, teachers' organisations, including one affiliated with the ruling CPI, condemned the move saying the government was entrusting the future of students in the hands of underqualified teachers. The government should prioritise filling the vacancies with recruits who got appointment orders from the department, and advice memo from the Kerala State Public Service Commission.

In a meeting of the District Education Committee, the top education officials of the district decided to "take forward online classes" by hiring 'trainee teachers' from BEd colleges and teachers' training institutes (TTI). The committee is headed by the DDE.

According to a note released by the committee, schools would have to complement classes streamed on KITE-Victers TV channel with personalised online classes by respective subject teachers in schools.

The committee has asked principals of BEd and TTIs to appoint one nodal officer each in their institutes. The nodal officers would draw up a list of 'volunteers' who are willing to teach from the final year batches and those who passed out last year.

The list should be ready by Thursday (June 10), said the note issued by the DDE.

Those selected from the list would be mentored for a day before assigning them classes, said Pushpa.

The headteachers can tap the list of trainee teachers based on their panchayats and subject expertise, she said.

According to the note, the trainee teachers may be paid a nominal amount to recharge their mobile phones by the PTA.

The department may consider giving them a trainee certificate, it said.

The District Education Committee will meet again on Thursday after the list is drawn.

The teachers of the district said they were not consulted before the department came up with such a decision.

The All Kerala School Teachers' Union (AKSTU), affiliated with the CPI, condemned the decision and urged the government to fill the vacant posts with qualified teachers.

The government gave appointment orders to hundreds of teachers in March 2020 but they were not allowed to join because schools did not technically reopen last year. This year, too, the government may not appoint regular teachers. "But AKSTU will not agree with the government's decision to recruit unqualified teachers to conduct classes," said Sunil Kumar Karichery, district secretary of AKSTU.

The government is not allowing the recruits to join schools on the technical grounds that the schools 'did not reopen' last year because of the pandemic.

'K-TET required to teach in schools'

Evjeen T K, another teacher who was earlier affiliated to the Congress's Kerala Pradesh School Teachers' Association (KPSTA), said the vacancies should be filled but not through short-cuts. "The least the government can do is recruit those who were given appointment orders and advice memos," he said. Or hire "qualified" teachers on a daily wage of Rs 1,100 as decided by the government.

G K Gireesh, district president of KPSTA, said only those who have cleared K-TET (Kerala Teachers' Eligibility Test) were qualified to teach in schools. "When hundreds of qualified teachers are waiting to join schools, why to hire underqualified candidates, and that too by paying them peanuts," he said.

'No fund to recruit temp teachers'

The Kerala School Teachers Association (KSTA), affiliated with the ruling CPM, said the District Education Committee's decision was temporary and the government would soon find a lasting solution.

Last year, around 200 persons cleared BEd in the district and another 200 got DEd, said K Raghavan, the state vice-president of KSTA. A similar number of students are in the final year of the two courses. "This initiative will provide them a good training ground and our students will also benefit. Of course, it is a stop-gap arrangement," he said.

DDE Pushpa said she zeroed in on the BEd and DEd students because she did not have funds to recruit teachers on daily wages. "But I will also have to ensure students are not left behind," she said.

Pushpa said the situation was grave in Manjeshwar, Kumbla sub-districts. The trainee teachers were needed to support the regular teachers and follow up on students, she said.

in Kasargod 116 people were cured of the disease on Tuesday;...